The Incredible Singetrack of Utah's Brian Head begs a question: Why go all the way to Moab, anyway? 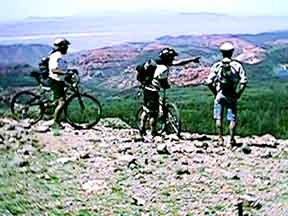 Aside from superb terrain, gobsmacking views, and a meticulously presented trail system, biking at Brian Head, Utah, offers some great gloating opportunities. Pull off Exit 75 just three hours north of Las Vegas on Interstate 15, and before embarking on the short drive to the resort of Brian Head, look back at the highway. Without a doubt, you'll see California- and Nevada-plated sport utes topped with bikes heading north, bound for Moab. It's hard not to laugh at these unsuspecting pilgrims. Bound for Mecca, they’re missing a miracle right under their nose, a miracle called 100 miles of convenient, easily accessible, nearly unspoiled singletrack.
In a way, Brian Head is to mountain bike resorts what Vail is to ski areas. Though neither may be the absolute last word in extreme terrain, both provide more trails for more athletes of more abilities than their competitors. In Brian Head's case, the variety can be traced to a blessed location. Situated at 9,900 feet in elevation on the edge of Utah's vast Markagunt Plateau, Brian Head can offer gently rolling terrain in one direction, steep canyon plunges in the other.
For experts, the two premier rides are the cool-sounding Dark Hollow and the cumbersome sounding Left Fork of Bunker Creek. Starting at a ridge just below 11,307-foot Brian Head Peak, the two trails were coated with a frosting of September snow during last year's Fall Colors Festival. Sticking more to the plateau, the Left Fork ride descends gently into lush high alpine meadows that gradually give way to pine forests. But before the woods swallow up the sunlight, the trail meanders along the plateau's edge, offering spectacular views. As you follow the fall-line alongside Bunker Creek, aspen groves surround you as the singletrack narrows. The riding then becomes more technical, but not confidence sapping. Roots and waterbars occur frequently, but it's still easy to keep a rhythm going until you cross Blue Spring Creek and reach Hwy. 143 after 12 miles. From there, you can ride mostly uphill back to the town of Brian Head or coast to the scenic village of Panguitch Lake and await a shuttle pickup.
Though shorter on singletrack, Dark Hollow is a more demanding ride. Dropping off Brian Head Peak, the trail traverses a slope heavy with fir trees. Soil as dark and moist as the B & M canned brown bread favored by '70's campers provides superlative traction for tight hairpin turns until the trail levels out at Cub Lake Meadow. Entering the Paradise Springs drainage, you become fully engulfed by your third ecosystem (after alpine and subalpine) of the ride. This particular realm is called the Canadian system, presumably because you'll feel like a beleaguered hockey goalie after biffing over the abundant roots. Turning onto Second Left Hand Canyon Road, you descend a jeep route past red rock formations so fantastic they look like God got bored at dinner and started playing with candle wax. After several stream crossings, you hit Hwy. 143 and can either climb the steep pavement back to Brian Head or descend to the town of Parowan for a shuttle pickup. If you take the latter option, your vertical drop will be nearly 5,280 feet - in other words, a mile-high vertical drop in 13 miles of sweet riding.
Despite the incredible scenery of those rides, Brian Head's most stunning attraction is nearby Cedar Breaks National Monument, a three-mile-wide, 2,500 foot deep natural amphitheater full of spectacularly colored pinnacles, ridges, and towers. Luckily, you can check it out from the Blowhard Mountain Trail. Beginning from a trallhead 10 miles southwest of Brian Head, the path clings close to some daunting cliff edges as it passes through bristlecone pines and the carved ramparts of Cedar Breaks.
All the best routes are meticulously described and mapped in the free Brian Head Mountain Bike Guide available throughout town. The guide lists 18 rides of varying degrees of difficulty. In addition, many of the listed routes can be abbreviated or lengthened by taking shortcuts or scenic loops. As if all these options weren't enough, there's also a six-mile system of dirt paths called the Brian Head Town Trails. Linking town offices, Brian Head Resort, and most of the businesses, these trails enable bikers a quiet way to get around the area without a car.
Be aware that at this altitude, prime riding season takes place between June and late September. For a fun orientation to Brian Head, check out its two fat tire festivals: The Brian Head Bash in early August, or the bratwurst and beer bonanza of Fall Colors/Oktoberfest, which takes place the third weekend of September. Call Brian Head Resort at (435) 586-2478 or (435) 677-2035 for more details. A variety of ski lift and shuttle packages are available from the resort as well. Bike Shop: Mountain Bike Heaven (928) 282-1312. The best coffee is nearby in Panguitch at Buffalo Java. For lodging, try the convenient, comfortable Brian Head Hotel (435) 677-1016, or reserve a condo through Brian Head Condo Reservations (800) 845-9781.
For a remote little mountain town, Brian Head also offers some amazing culture. Wayne Newton is just three hours away in Vegas, and nearby Cedar City showcases the renowned Utah Shakespearean Festival every summer. Call (435) 586-7880 for tickets, show-times, and information on shuttles from Brian Head. Just be aware that in this part of Utah, "To be or not to be?" is not the question - it's "Why the hell would anyone drive another six hours just to go to Moab, anyway?"
Posted by Mountain Bike Heaven