Mountain bikers will do almost anything especially if it’s packaged as a race. That’s what took us to Moab, Utah several weeks ago. It wasn’t a gnarly downhill race or even a cross country race as such, but rather it was a 24 hour race. Fortunately for me, I was part of the technical support crew and not racing. The weather was spectacular, which is a bit unusual for Moab during this time of the year, with temperatures approaching 90 degrees during the day and dropping to 40 degrees at night. The 24 Hours of Moab kicked off a week of festivities and races that is part of the annual Fat Tire Festival in Moab.

The 24-hour race was sponsored by Newsweek. Racers either rode for the entire 24 hours or were members of a team and swapped off laps. The course was a 16-mile super sandy dirt road with some sketchy drop-offs and the course got even softer as the race progressed. There were 360 teams of various sizes with the largest concentration of teams coming from Colorado. Even though there were only a few teams from Arizona, they consisted of some very fast riders. 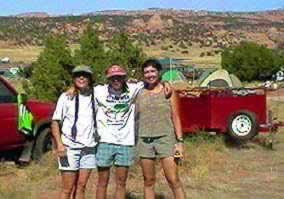 The team I was support for was a veteran (over 35 years old) women’s team. According to team captain Debra Morrell, it was harder getting the 4-team members together than it was to actually do the race. They had 3 committed racers, but kept on having trouble rounding up the 4th. They finally found a 4th, but as the race progressed, it was clear that they would have been better off with only the 3 hardcore riders. As it turned out, their 4th rider hurt herself on her first lap, the 4th lap for the team. Her knee injury was not super serious, but it cost the team the lap and an hour and a half.
The penalty took the team from 45 minutes ahead to 45 minutes behind. It took them 2 more laps to re-gain the lead, and this time they didn’t look back. But that was not the end of problems for the team. Since this was a 24-hour race, there were several night laps for each rider. The night laps were ridden with lights and Heather Walker ran into light troubles on her night laps. Her main light went out after 40 minutes leaving her with more than an hour of darkness to struggle through. By her second night lap she had rigged a strong backup light that helped ease the problem.
As the night wore on some teams slept, but not ours. Debra Morrell, Heather Walker and Janet Kerby continued to swap laps through the night and by daybreak they had a convincing lead in their class. For me, the highlight of the night was watching the lights flickering on the racecourse all night long. I don’t know how these gals kept going, but each one ended up by racing 4 sixteen-mile laps. By 10:30 the next morning, Janet Kirby was handed the last lap for the team and she raced them home to victory. These gals had so much fun that they are already looking for the 4th member for next year’s race. 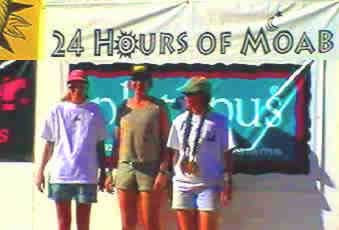 Congratulations to the entire team and all of the racers. This type of race really puts everyone through their paces.
Posted by Mountain Bike Heaven