Happy Halloween All!
Does anyone read these? Let me know-
I always thought it was strange to celebrate a day of the dead by dressing up in funny costumes and roaming around the neighborhood collecting candy.... but it was tons of fun as a kid, and almost more fun as an adult to see the crazy things people do when you give them a whole day when its OK to act a little strange..on my trip to the mailbox that morning i was surprised to see the Grim Reaper himself!
I pulled out my camera and shot some quick pictures- 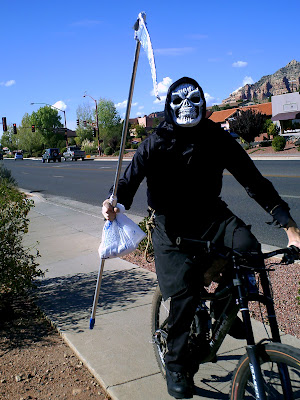 Apparently on his way back from a stop at the liquor store or AM/PM on his mountain bike he narrowly missed me (he has done this multiple times). 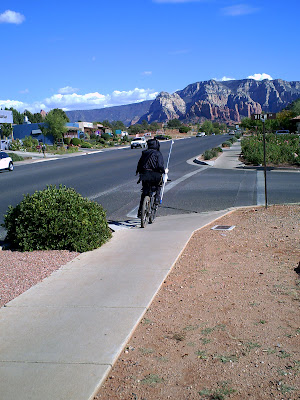 Bike karma hit him hard as he picked up about 75 goathead thorns and got himself a flat tire. Of course the grim reaper has no slime in his tubes because "..he's not from around here.." and he's asking "Put what in where?" so after selling him on slime tubes(he digs the green color, reminds him of the ectoplasmic goo from ghostbusters) he was on his way. 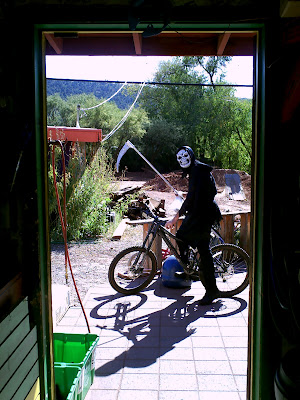 Before he left he said that he was thinking about doing a pink jeep tour or balloon ride and sticking around for the NOD fest, mostly because of the mountain biking, and he loved his room at Los Abrigados "..their gym is great,and they have the best hot tubs..". his favorite ride so far is deadman's pass, but he also likes hanging out near the Devils kitchen.
That was just in the first few minutes I was at work that morning and over the day things degraded steadily. by lunch I had been accosted by an octopus and chased by a cardboard box with legs full of body parts and more- but I did get a good shot in on a telletubbie thing. kicked it right in the * if it has *. it ran away, but I'd swear it was laughing as it ran.. by the end of the day I was in full costume as a Celibate Drunken Monk. To drunk to take pictures, the rest of the eve. was a blur, but my headache the next morning told the tale of too much fun being had. what did you expect?; my first customer on halloween was the grim reaper!
Posted by rob narly No comments: